When we left our RV and car in Washington a month ago, our hope was to get back to Washington before too long. However, that is not looking possible for the near future. So we are doing the limbo dance…actually, more like the Texas-Arizona shuffle, as we have been going back and forth between the two states.

Currently, Kimberly is in Arizona and Scott is in Texas. Thankfully, Scott is not the areas of Texas that have been so damaged by Hurricane Harvey. Our thoughts and prayers are with the people in those areas!!

Adjusting our expectations, it looks like it will be at least until the end of September before we are finished going through Scott’s mother’s estate and have the house ready to be put on the market. And the situation in Arizona is ever-changing. Kimberly’s grandmother is in Hospice and we had to recently put her in a care facility as the care got to be too much for Kimberly and her mother. We also need to take care of Kimberly’s grandmother’s house.We have all our possessions down to what fit in the RV and a small storage unit for mementos and special items…and now we have two households filled to the brim to deal with! Basically, we are dealing with two family estates. It is overwhelming. Not just the stuff (and there is plenty of that!), but the emotions and trying to be sensitive to the family members involved.

All this to say, our RV days have been put on hold. Our near future is uncertain. There will be more of the Texas-Arizona shuffle and then who knows?! We will probably winter in Arizona.

We were in Texas for less than a week taking care of my late mother-in-law’s estate when my grandmother fell and took a turn for the worse. My grandmother is 104 and has been in and out of Hospice this year. We drove 15 hours straight from DFW to Phoenix. It has been a difficult week. We are thankful we have the flexibility to be here to help my mother and grandmother. 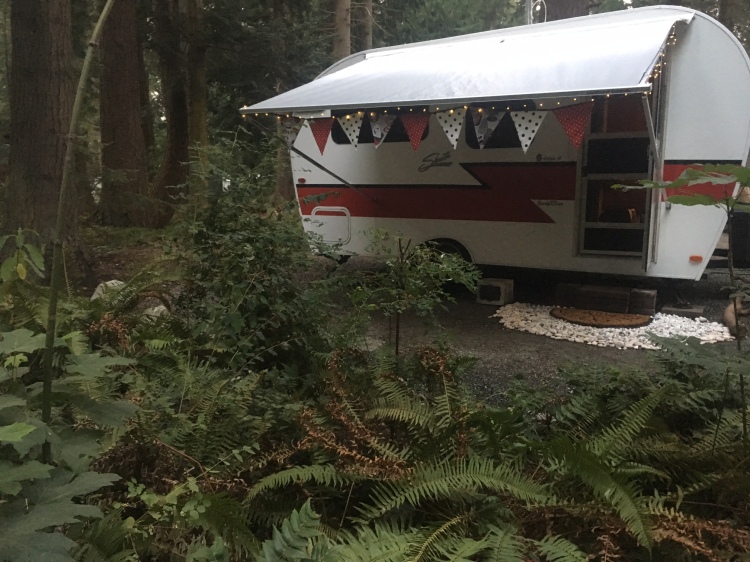 Wings’ new home in the forest

Or perhaps better stated “change in plans AGAIN”….as I mentioned in my blog post on July 17th…change is part of life and most certainly part of RV living!

July was a strange and sad month…Scott’s mother fell broke her hip, had surgery, and a less than a week later passed away. Scott had two last minute trips to Texas. We also had to leave two campsites quickly due to issues beyond our control.

Towards the end of the month another situation happened that is rather personal and I have debated sharing it. Since the shower in Shasta is small I often take showers in RV parks and campgrounds. Showers can be a vulnerable place and safety is important. Rather than share all the details, I’ll just say this…I was alone in a shower in an RV park restroom and was harassed by three individuals. When you are taking a shower with only a shower curtain in front of you, there is not much to protect you. If there had been cell reception I would have called the police. It was a horrible violating experience. Thankfully, my oldest daughter was visiting us and came to find me in the restroom when I had not returned in a timely manner. The RV park did little to help and actually made me feel worse about what happened. We left the park as soon as Scott and my daughter could get packed up to leave, even though it was evening and we had no place to go. I just needed out of there and to feel safe again.

My immediate emotional reaction was, “I am done with RVing!” However, we knew this was just an emotional rash reaction. But, I did and still do feel that I need a break from RVing. I need to feel safe.

That situation coupled with Scott needing to be in Texas soon to attend the probate hearing for his mother, attend some work training, and my grandmother asking me to visit her in Arizona…led us to leave our RV and car in the Pacific Northwest and fly to Texas.

Our current plans will be traveling (by car) between parts of Texas, Arizona, and Colorado to help with family matters. Our oldest daughter will take care of Wings for us. Then we hope to return to Washington.